One of the reasons I started a blog was due to a desire to participate. It's been hard lately, though.

I recently read a blog post by a mommy blogger that describes something she calls "The Blur":


My father describes the years when his children were young as "The Blur". So that's where I was - deep in the Blur. My father is a somewhat inconsistent source of wisdom on parenting issues, but he hit the nail squarely on the head with this one. I am on a 24 hour cycle of waking, sleeping, nursing, napping, cooking, cleaning, wiping, folding, dropping off, picking up and putting away.

She goes on to describe how this phenomenon has made her a moron (her word, not mine). I'm a mother of a one year-old (yes, she turned one last week--ahhh where did this year go??? Oh wait, THE BLUR) who also works outside the home in a job that is intellectually rigorous, to say the least. I'm not sure I'd call myself a moron in any complete sense, though I do have my braindead moments that I know are caused by a combination of sleep deprivation, stress, and a flirtatious dance with burnout. I know for a fact that most of the time we in my little family are in "survival mode", and that's okay. (Somehow, we're thriving in it? Is that a contradiction? Let's call it a paradox.) "Survival mode" can be beautiful too. But, it is blurry. And a large part of why I haven't posted in so long, but not the reason entirely...

...because you see, I am also in another blur. The Junior Faculty Blur (TM). I have no link for that one because I am coining it now as a parallel but similar experience to the Motherhood Blur described above. This one looks something like: "I am on a 24 hour cycle of waking, sleeping, planning, writing, reading, highlighting, outlining, emailing, tweeting, posting, meeting, talking, and teaching." Yep, that about describes it.

In this post from last November, there are three writing projects listed under "Future". Two of them (the book chapter and the article) are out of my hands (read: done, for the time being--hallelujah!). The third, my thesis, is underway. It all needs to be 100% done by November 1st of this year so I can apply for promotion to the rank of Associate Professor. I'd love to blog about each, and I am hoping to, eventually...but not today. 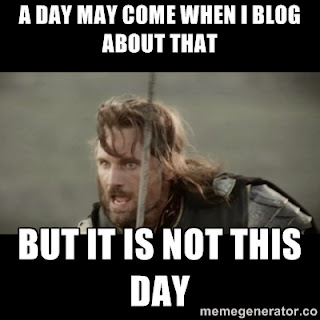 Plus, the Fall semester begins in less than a month. Plus, there's that adorable, mobile, one year-old I mentioned (and oh em gee she looks tiny in the pictures at that post from last November!).

Which is all my way of saying, my apologies, friends and readers, for my absence. I really wish I could participate more in the act of reflective living-learning-working-mothering right now. But I'm learning there is a season for everything, and right now I am in a short but intense (read: deluge) season I'm calling The Blur x 2. I can see the light at the end of the tunnel, though, which means I'll get my head above water soon.

But until then, here are some pictures of my Bookie, intentionally not of her face since I have a policy (for now) on my blog where I don't share pictures of her actual face nor her first name. If my year has been blurry, I can't imagine what hers must have been like!

And now, back to it. See everyone when things get a bit less blurry!
Posted by Donna Witek at 9:11 PM