First encounter with The Glass Menagerie

There once was a girl who thought she knew a lot. Her mind was quick. She reveled in learning, and was not shy about expressing her thoughts and ideas as they came to her. 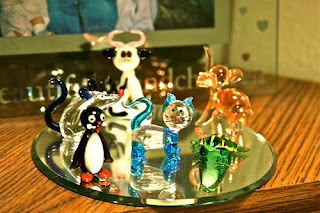 One day she was sitting at the front of her high school English class, watching her teacher as he prepared to start the lesson. That day they were beginning The Glass Menagerie, a play by Tennessee Williams. The girl was in her element. The teacher only had a small handful of copies of the play, stating they would rotate who would read parts during each class period, while the rest of the class listened. This meant there would be many opportunities to volunteer to read, which was one of the girl's favorite things to do.


There were three characters in the first scene of the play: Amanda, and her two children, Tom and Laura. Amanda had the most lines, followed closely by Tom. Laura did not have many lines at all. To begin the lesson, the teacher asked who would like to read, and assigned three readers to the three parts. The girl was selected to read Amanda.

The scene began, and the readers read with clarity and enthusiasm, even as they were encountering this story for the first time. The rest of the class listened politely. The teacher alone would notice the glazed stares of most of his students during this exercise as they tried in vain to grasp the meaning of the text, being recited enthusiastically but somewhat robotically as the readers sat at their desks and read.

The scene ended, and the teacher thanked the readers. He asked the class who they thought the main character of the scene was. Someone answered, "Amanda," owing to the fact that she talked the most. The teacher nodded, accepting the answer and its explanation without comment.

The teacher then arranged the front of the room into a makeshift dinner table using three desks. He asked the readers, including the girl, to take their places around the table, with Amanda and Tom sitting across from each other, and Laura between her mother and brother, facing the audience. They then read the scene again.

After the scene ended for the second time, the teacher asked the class again who they thought the main character of the scene was. The students considered the previous answer given -- Amanda -- and the brighter members of the class assumed this meant the correct answer was someone else. The girl was enthralled, and held her tongue, curious to see how this would play out.

One student tentatively answered into the silence, "Laura?"

The teacher asked, "Why do you think the scene is about Laura?"

"Well... she seemed to be pretty affected by her brother and mother and how they were bickering. She's also really quiet. Probably because her family is so talkative. So, that's why I thought maybe she was the main character of the scene. Plus, she was sitting between the other two, kind of in the line of fire, ya know?"

And then the teacher played his trump card: "And you would never have noticed that if we hadn't have seen the scene played in front of us, with simple blocking. This is why, whenever we read plays in my class, we will only have enough copies for the characters in the scene, and we will 'perform' the scene in front of the class. The point is not to 'act' the scene, but to see how the story is told through more than just the spoken lines. There is nothing that kills a good play more than reading it from our seats and following along in the book."

The girl was blown away by this revelation. The teacher went on to say that, in fact, the scene told us a lot about all three characters, so there really wasn't a wrong answer to his original question. But the girl disagreed. He was right. The scene was Laura's. The girl had learned something new, and was quietly humbled in the process. She had thought she knew a lot. Maybe she didn't know quite as much as she thought. And rather than be annoyed by this, she was very excited at the prospect of the new knowledge this teacher had to offer them.

The girl was sure of one thing: this would be a great year in English.

This is a true story. The girl was me, and the teacher was my greatest mentor during my high school years, Mr. MacLean. He was my director for four wonderful years of shows (four musicals and two plays), and he was my teacher for two rigorous years of English (English 11 and AP English).

I found out this week that Mr. MacLean will be retiring from my high school alma mater at the end of next year. He changed the way I ingest stories and texts, allowing them to change me as I read them. The above anecdote is one example of how he did this, but there were so many more. I can only imagine that he will be sorely missed at Woodlands High School.

(Photo courtesy of Tojosan under a Creative Commons license.)
Posted by Donna Witek at 12:57 AM

Email ThisBlogThis!Share to TwitterShare to FacebookShare to Pinterest
Labels: Librarian in the Kliros, Story